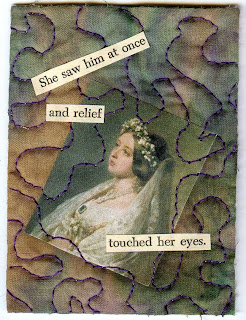 An ATC using “found poetry” made for an ATC art retreat I went to last month. This uses paper attached to the fabric using gel medium, and the edges are ala Melanie Testa in a recent episode of Quilting Arts TV.

Throughout this post there are the cards I both painted and quilted for Art for All 2009.

What is Art for All? Well, it’s a gathering of online folks who trade and make ATCs (Artist Trading Cards) over at ATCSForALL.com. I’ve been a member for a long time, including being a member of the site it all grew out of, atcards.com, which is now defunct.

So the idea is that we would all get together, meet, trade, learn techniques from each other, and otherwise generally make stuff and gab. My roommate, the awesome VintagePix, took bunches of photos you can see on her Flickr.

I thought the weekend was great. I had a good time meeting people I have been online buddies with for a while, and the classes were great. Were there some problems? A few, but nothing that “ruined it” for me. Scheduling changed often, which for someone like me is a problem (I like having one plan, and don’t like changing plans). The art room was acknowledged by all to be too small for all of us to work in. But really, those are minor things compared to how much fun we had.

I enjoyed seeing how people interacted as far as trading in person went, because it was so interesting. I don’t know if some folks were prepared for the honesty and “facial reaction” to your trading book as those things are hidden online. I also found it psychologically fascinating as to the value a person places on their art over another person’s. I found the reaction to fabric cards interesting as well, and it was remarked to me once that they did not seem like they took a long time to make (as what? compared to their cards, perhaps?). I believe this perception changed a bit when they saw me sewing them. It was also strange to be called by your online user name all the time! 🙂

I don’t know what I can do logistically to get my sewing machine to the next one if not held in Indianapolis, so we will have to see if I can even attend the next one, but I enjoyed this one a great deal and hope to do it again.

WOW. I like the “This n That” posts because they give you snippets of what I am doing, and also get these ideas out of my head. You know, those little things that say “I should really blog about this, my art friends and family would want to know this!”
*********************************
Check out my POLL —–>>> Vote vote like a baby stoat!
*********************************
I have just reached 90 craft and art blogs in my art and craft blog reader folder. I seem to add another 2 a week. I have to cull a few for not updating for months on end, and I guess I’ll find them again if they come back to “blog life”. Would you want me to share my list sometime? This is not the list of cute pictures, LOL cats, or comic book blogs, but blogs that I read regularly that inspire me.
*********************************
So I have just purchased “The Creative Habit” by Twyla Tharp. I am over halfway finished with the book, and am really enjoying some of the concepts. I am not a trained artist. I never took an art class past grammar school. This book makes me feel that I am one of those who can call herself “an artist”. It’s got exercises that really make you think about how you approach art, no matter what kind it is. I’ve suggested DH read it next, for his writing and movies, and of course, his miniature painting.
*********************************
I did spend the weekend in Indianapolis last weekend at the ART FOR ALL 2009 event sponsored by ATCSforAll.com, in which we took classes, traded ATCs, drew in each other’s journals, and laughed and just had a great time! I’ll post my lovely cards I made in a separate post Sunday. Here’s a photo of the art room.

It’s rotten to be sick, and this cold really knocked me for a loop. I was so drained, I thought sewing this weekend would be impossible.

Luckily, I felt ok enough to sew a bit today, so I got a couple of things done.
I also found a few minutes to scan everything I have done lately for your viewing pleasure.
These monsters were so freaking cute to do. I can definitely see patterns for these in the future.

These ATCs are for trades I’m involved in over at ATCSforAll.com.

Lastly these are November’s theme, fall leaves. Anotehr topic suggested by the DH. Those perfect leaves are silk leaves bought from a craft store.

Check out all of the work I did in one weekend! Whoa!

First off, October’s weekly theme is “Monsters” of the cute and evil varitety… I made about 6 sketches, and will work from those. The sketches are about an inch high, and I was surprised that the monster translated well into the larger format.

Next are some thread jellyfish for a swap on Mailartworld.com.

Last, a table runner for Halloween that has been quilted for ages, but never bound…

Lest you think all I do is quilt, here is a “candy corn” hat I crocheted. I did this in one evening watching tv…
Read More
1 2 >