For the Blogger’s Quilt Festival, I thought I’d show you the making of my quilt entry for An Exquisite Moment, called Geschwindigkeit (Speed).

Here is the quilt, called Geschwindigkeit (German for Speed).

Here is the photo of my hand that I worked from.  It took it about a week after I bought the car. 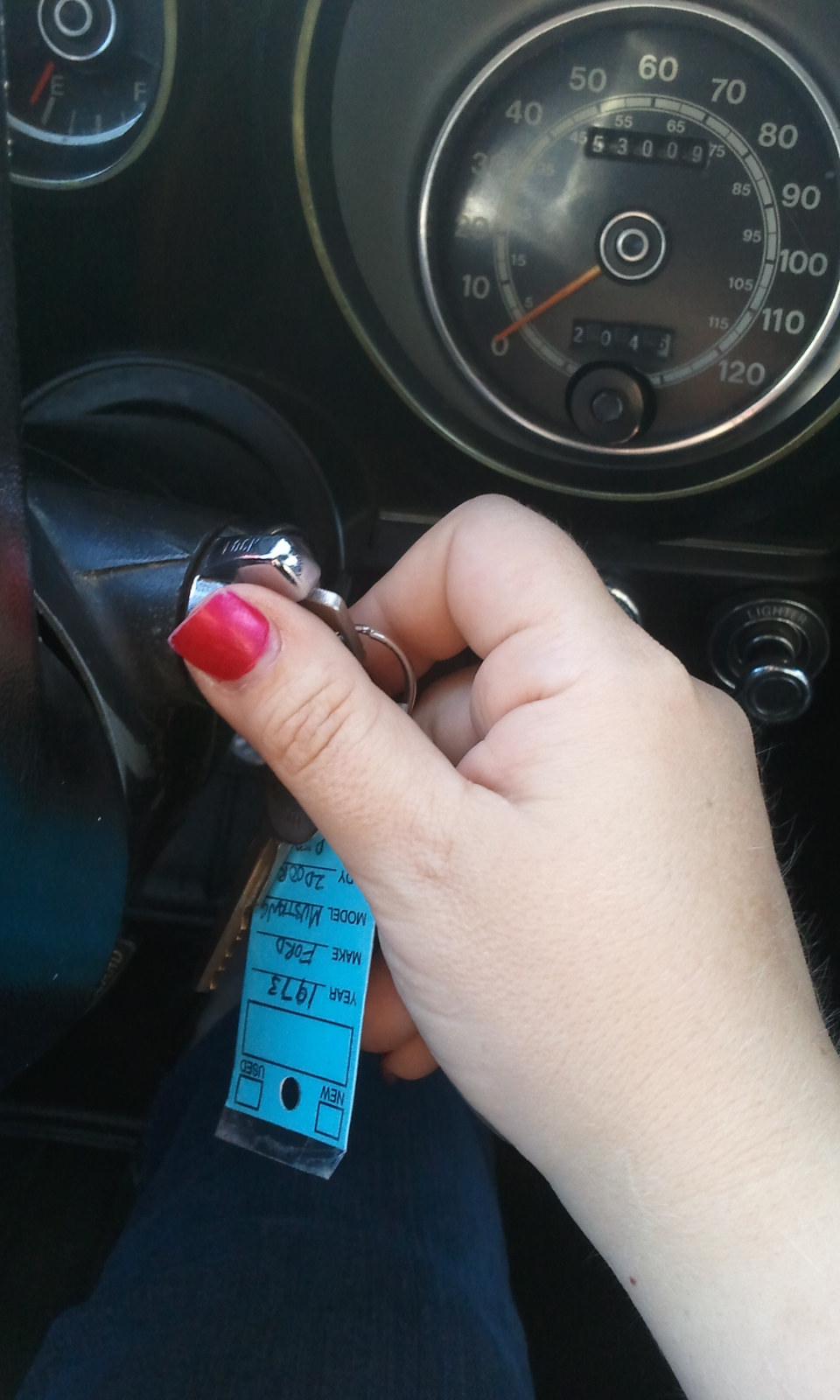 I drew outlines of the design and then blew that up to the size the quilt needed to be.  I made some design choices, like removing the plastic wrapper on the keytag, and giving my wrist a “tummy tuck”.  I also made my fingernail red instead of pink (red being the color of the car). 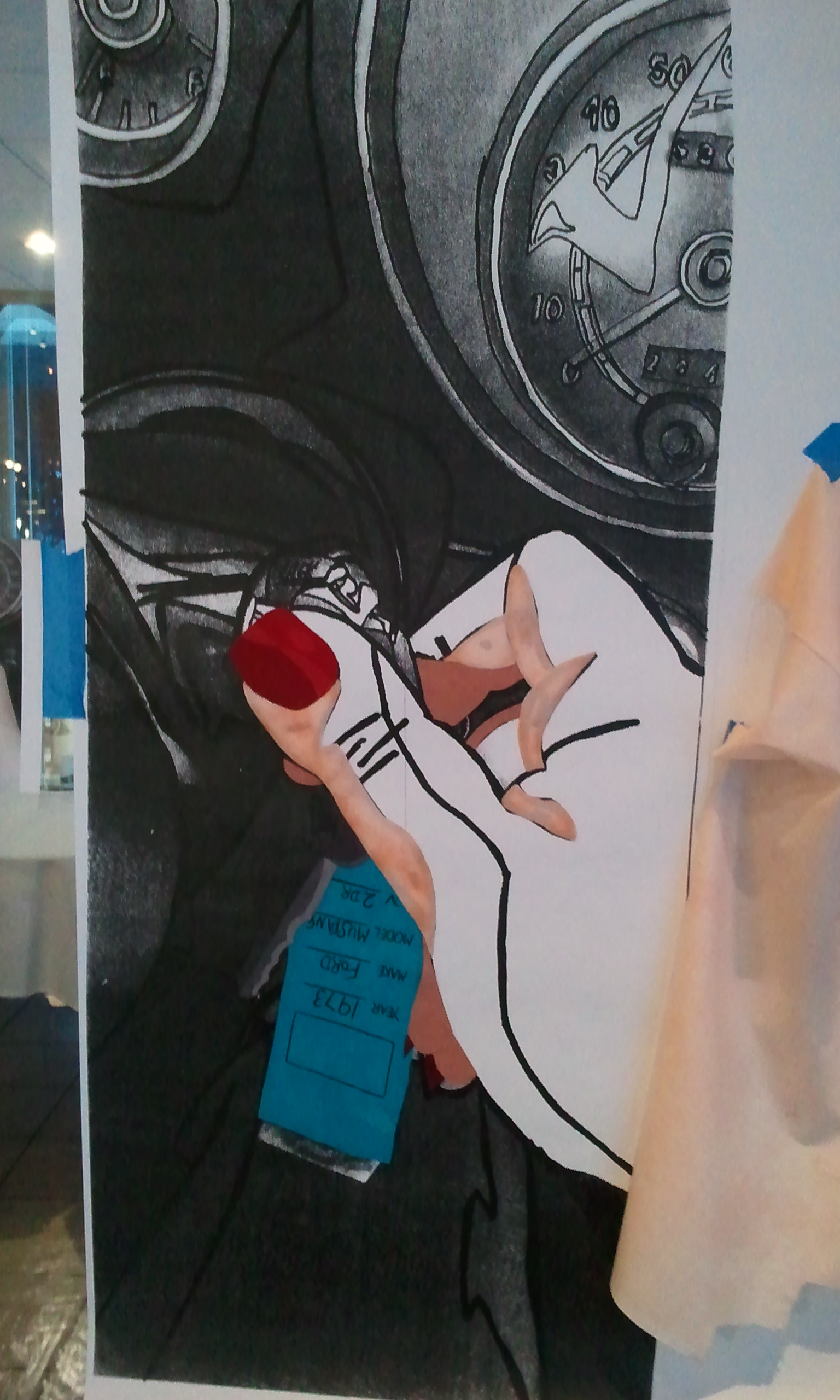 I worked on a sunny window and used the lines to create patterns that I traced onto the pre-fused fabric and then stuck the finished cutout pieces right back onto the original pattern.  You can see the photographs taped to the window to ensure I was using the right colors. 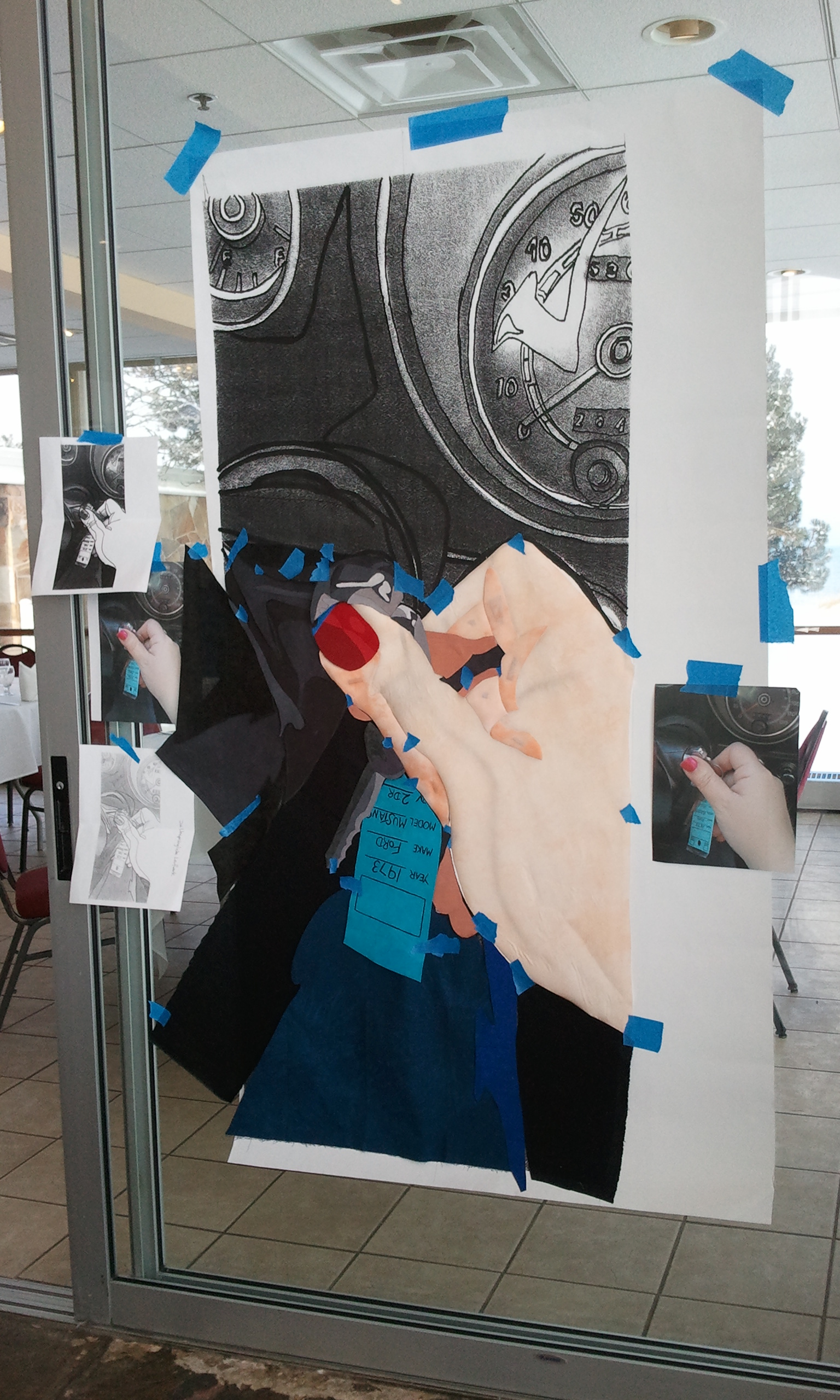 After I had it all cut out, I fused the entire thing to a white fabric background.  I used white instead of black because the black fabric would have showed through the hand fabrics. 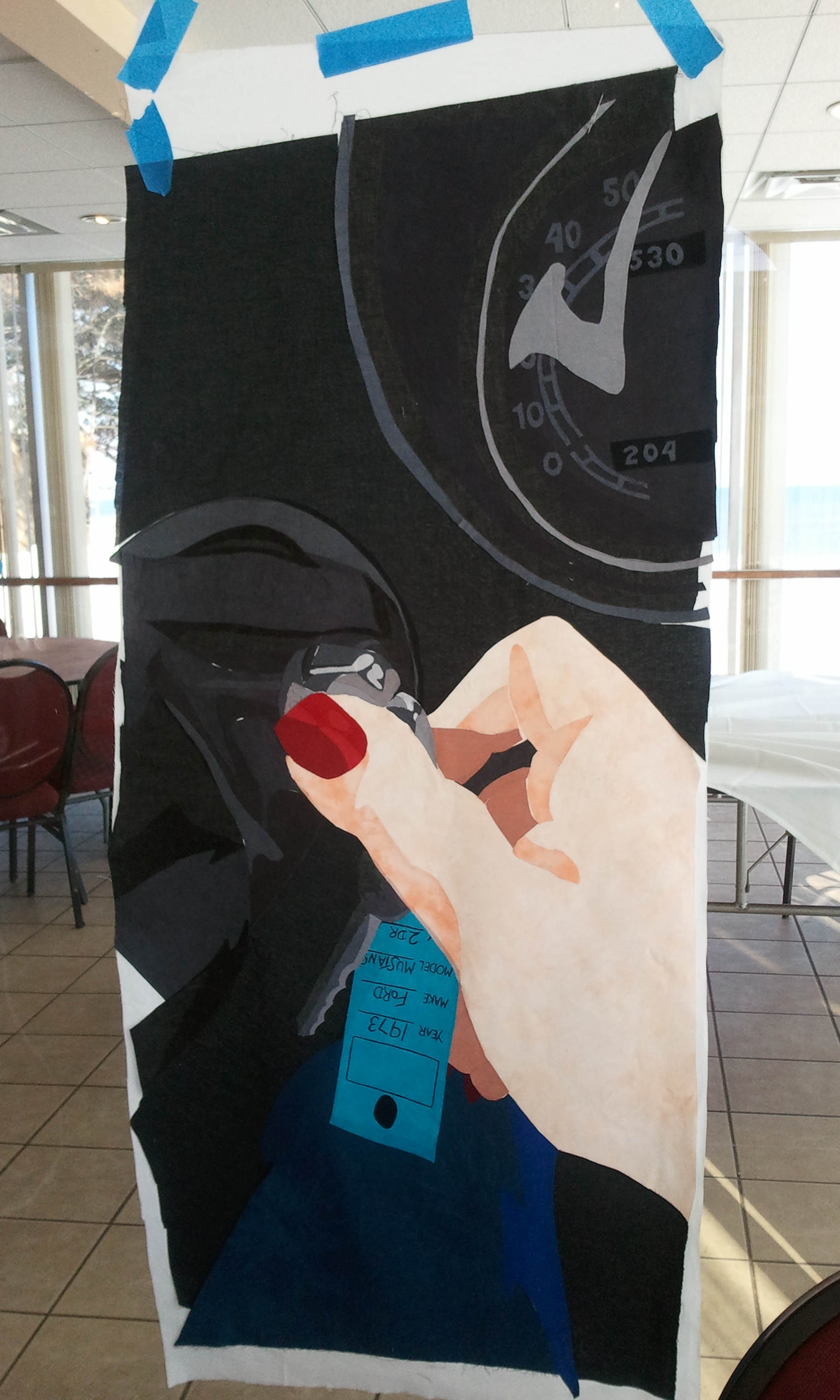 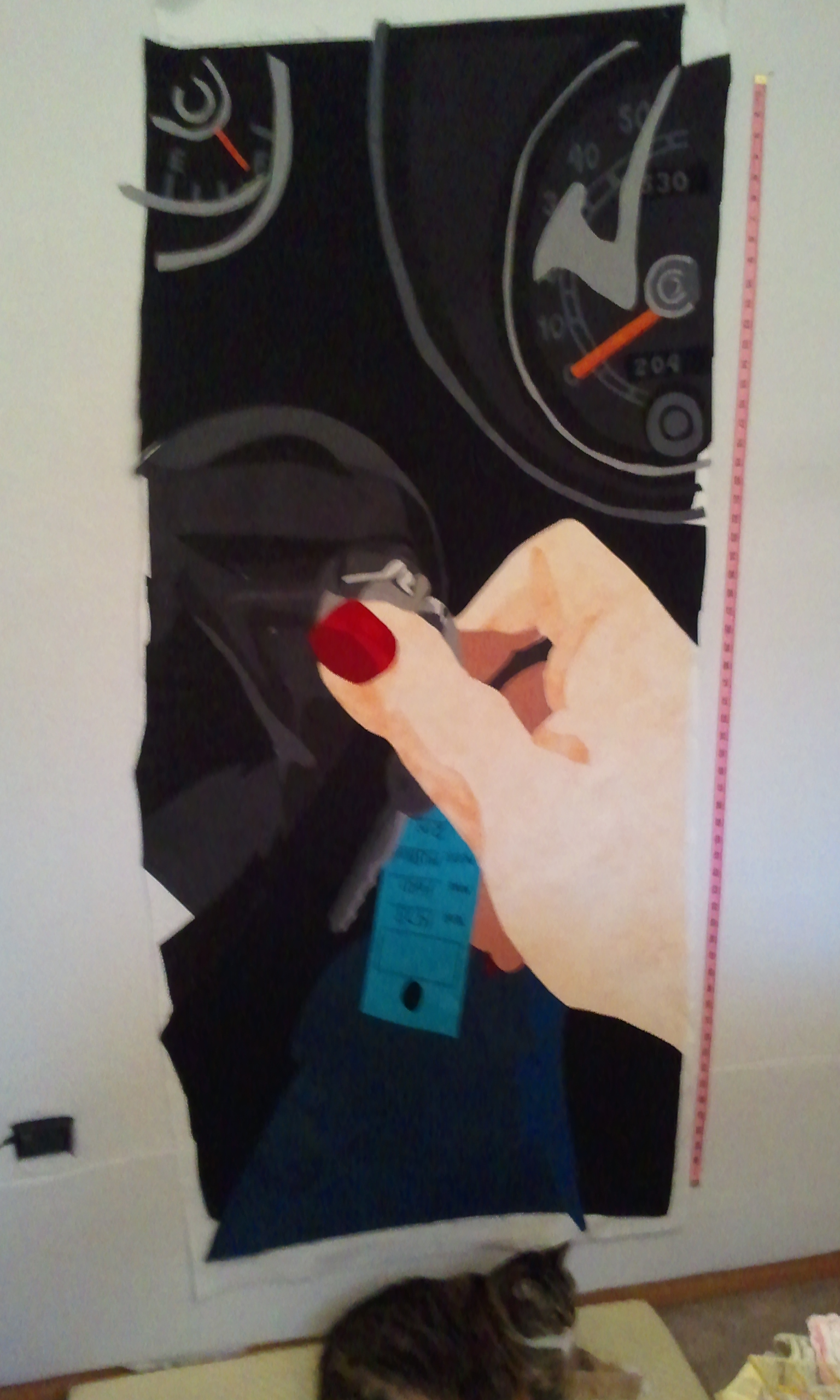 I then made my quilt sandwich and auditioned the threads.  I did not have enough “shades of grey” so I had to go shopping for lots of grey thread. 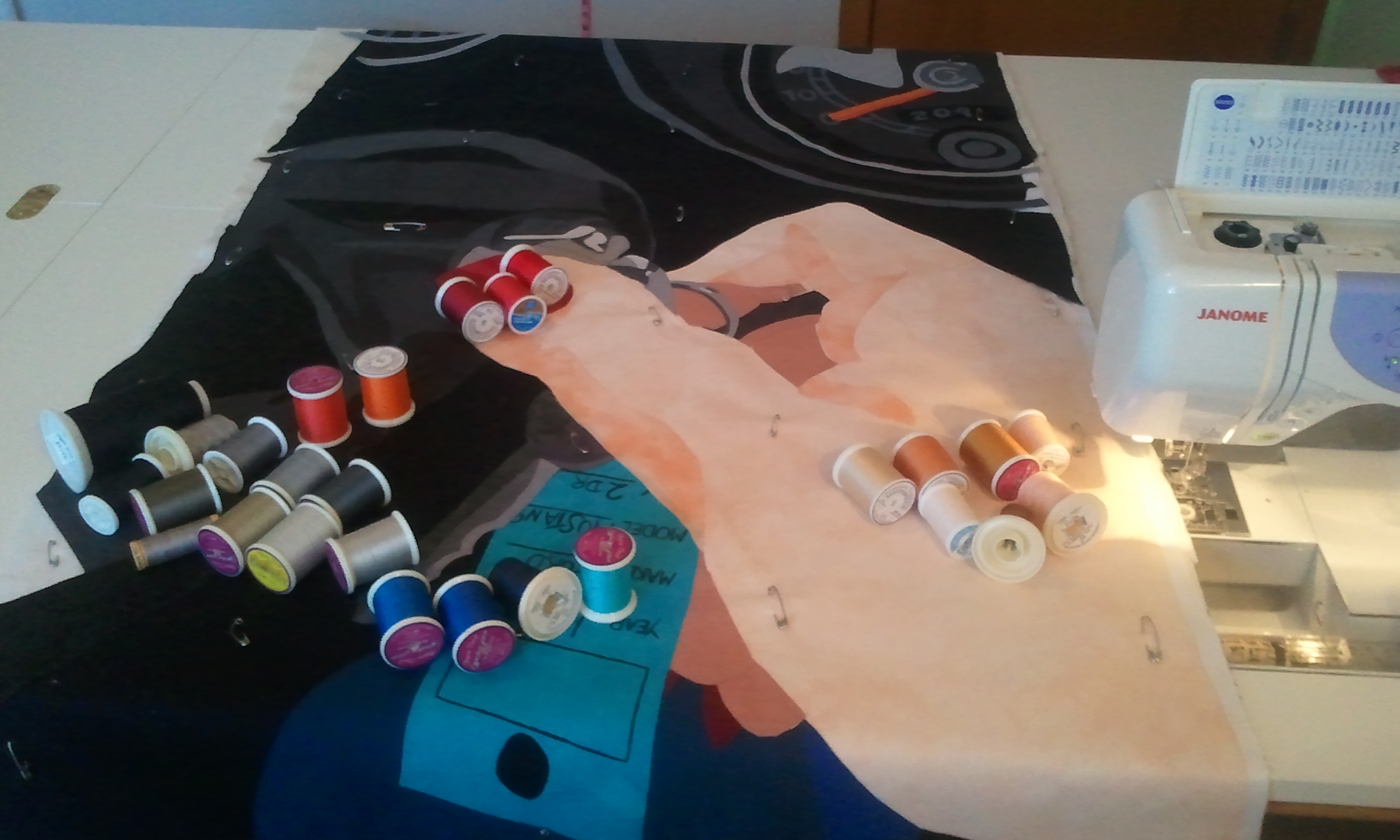 Then it was on to quilting and thread painting! 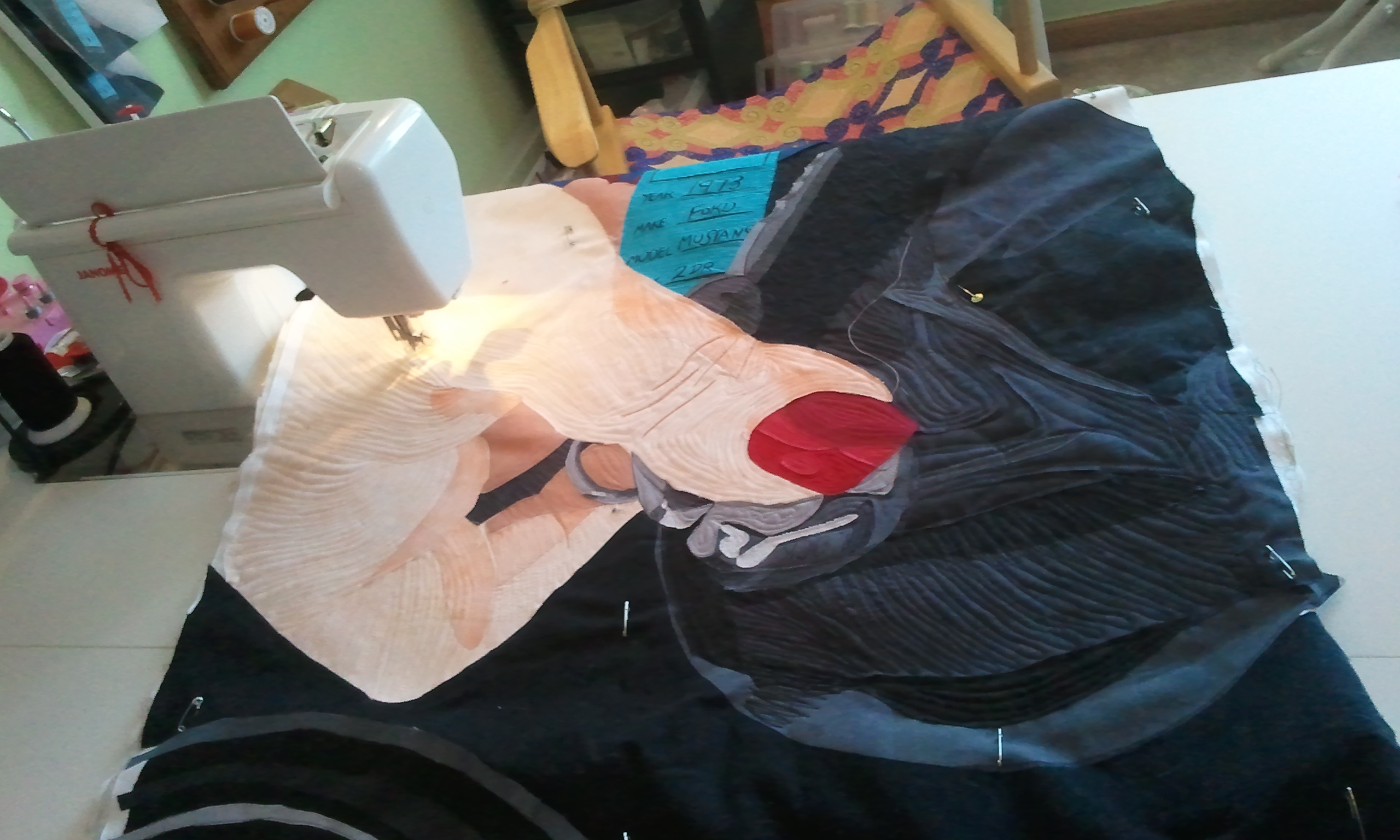 I quilted it on my domestic machine. 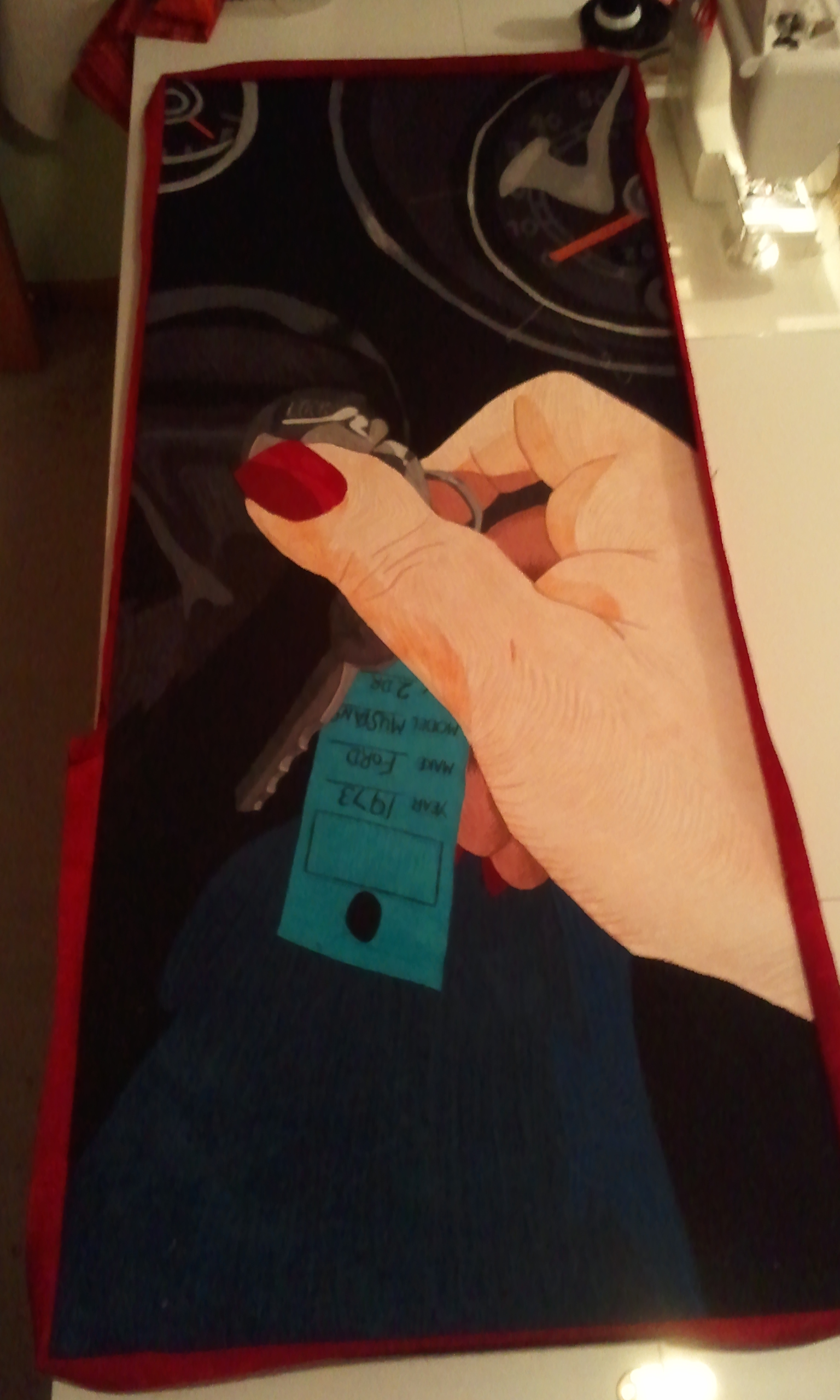 I worked late into the night to get the binding on so it was ready for photographs.  I bound it in red because the car itself is red and it would be hanging on black drapes, and it’s a dark quilt.

Here’s a detail of the quilting after it was done.

Hope you enjoyed my little “making of” this quilt!

I recently had someone tell me that they knew a project was mine because it was my “style”. Really? I has a style? This made me take a look at some of my past works, and I looked at sketches of upcoming projects I plan to work on. Indeed, a formation of a style is there. If you look at my Japanese Doll theme, and it continues with the Robots theme, I do have a signature look to the work. It actually came about before these works were thought of. My Journal Quilt, that was not made in time for jurying, was very much in this same vein as these recent themed works. Is it original? Well, the work is original, but is the style?

In clothing, it’s easy(ier) to say that this dress looks like Betsey Johnson, or that looks like Michael Kors. Surely a painting style can be attributed to being “after Picasso”, or “after O’Keefe”, or whoever has the closest style to your painting. It seems like my style copies so many things that I am influenced by, that I did not originally see my own style. Am I inadvertently copying the style of someone else? Who is the original artist if my style and the other artist’s style are developed independently? Is it then in the realm of who is more famous? At what point does your style become yours? Back to clothing, the recnet Project Runway winner Christian Siriano has a look that is becoming his own, but it is often still described as “Vivienne Westwood meets whoever“. The point is: when does it become his own?

After discussing this with my husband for his feedback he had 2 comments:
1. This whole thing goes back to “are there any truly original ideas anymore” and because I am influenced by what I see, by natural extension my work is going to incorporate those influences. His own work has a style that I recognize, and someone mentioned to him previously, but he does not.
2. That I should not get caught up designing to meet my “style”, but to continue to make art and let that style develop over time.

This second one is true. This got me thinking about why I am so concerned with even wanting/having a style at all, which led me to “why I make (my) art”. Oh boy, that is a topic for another post!