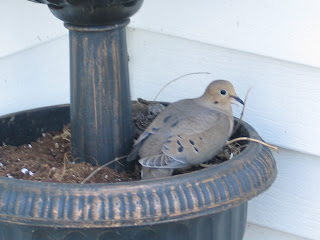 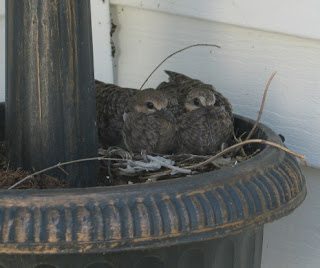 I miss the mourning dove birdies that took up residence in my planter this spring. You may remember Ethel and Squab #1 and #2 from the spring of 2010. I named this momma “Momma Bird” and said hello to her each day I went out to get the mail.  She never flew away from me approaching.  The babies got so big and then I went away to a comic book convention and when I came back, everyone was gone.  I felt all “Tony Soprano” with his ducks in his pool, I really missed them for a long time after.
Read More
My hand injury I mentioned in my last post is much worse than it initially appeared.  My general practitioner gave me bad advice in immobilizing my finger, which caused some of the ligaments to become shortened, which meant I could not bend my finger without lots of pain.
I’m now in physical therapy for the finger and it’s doing much better!  But, they don’t want me sewing until I have zero pain, and we’re not there yet.  It’s sad to want to make things and not be able to, so I’m trying to suck it up.   I have some doodles that I hope become great quilts once I’m able to sew again….
Read More

I am temporarily sidelined from my quilting projects due to a repetitive motion injury to my index finger.  I had it in this cast thing for 2 weeks only to realize it hurt worse than it did before the cast.  I went to an orthopedic doctor who said that the cast my regular doctor recommended was the wrong thing to do.  Hooray! 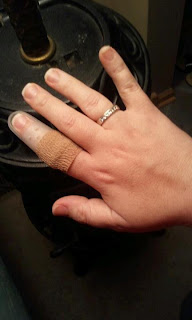 I’m now getting physical therapy for it and I hope to back in action soon.  I hope it isn’t too long now because I thought up the most amazing quilt ideas! 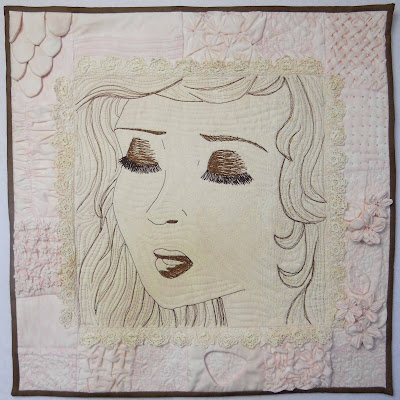 I had a really tough time deciding what to do with the fabric in my Arts & Old Lace challenge packet.  I went back to a sketchbook from High School, and immediately knew this face was what I had to use.  The borders are fabric manipulations, and the vintage lace and the drawing from my past make up the “old arts” I wanted to represent.
I titled this piece “Nachdenklich” which means “contemplation”.  I find the face in the drawing very thoughtful, and I had lots of contemplative moments making each of the fabric manipulations. 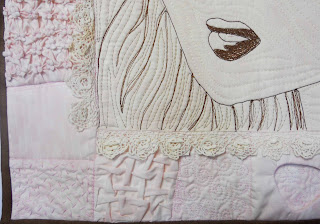 Mega thanks to Judy Gula and Cyndi Zacheis Souder for organizing the challenge and hosting our various locations the challenge will be travelling to throughout the year.  Be sure to visit Artistic Artifacts for fun stuff, and maybe you can find out more about our challenges there!
Read More

Congratulations to Jan Quigley, who was the winner of the signed copy of Sew Embellished!  Thank you all so much for entering and I hope you come back to visit my blog and every one else who was on the Sew Embellished tour.