I am super excited to be at the big show, here in Houston. There’s so much to tell you… there’s so much to show you!  Let me begin…
I was up wayyyy too early to get on my plane to Houston.  I love flying over Chicago at night, but when you leave so early that it’s still dark out? 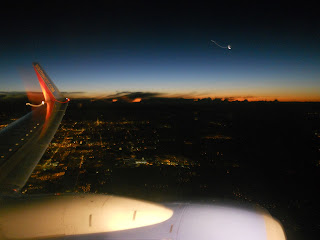 My camera broke the day before the show, so I bought a new one yesterday and I am still trying to figure it out.  Sorry that some of the pictures are blurry.
I arrived and didn’t have a hotel room yet, so I dropped off my luggage and was off to see the show. 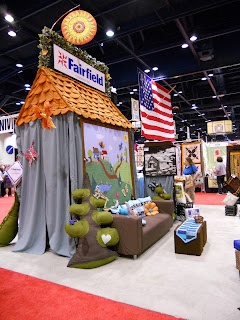 The vendor area is enormous.  The booths are spectacular.  Having only been to the Chicago version of this show is like the Sadie Hawkins Dance versus Prom.  I’m definitely at quilt prom. 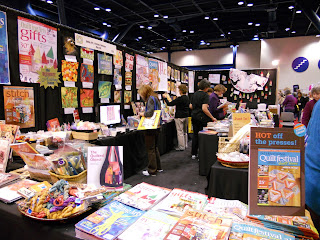 I stopped by the Quilting Arts booth to say hello to my buddies and scope out the Open studios section.   Look at this! 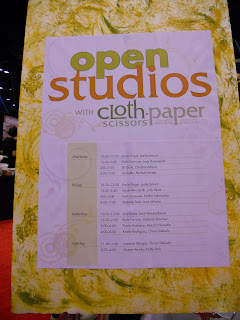 Look at this close up! My name in lights.  Well, not quite. 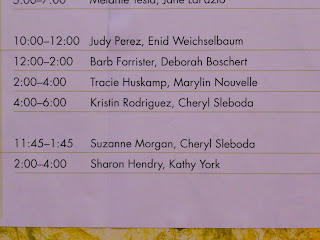 The QA booth is awesome as always, and my little “10” postcard is even hanging on the wall!  Awww, isn’t it cute there? 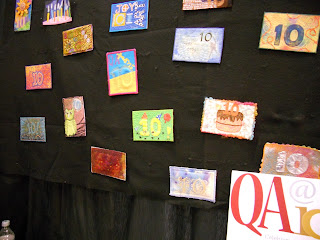 The show floor was typical IQA show floor, and it’s THURSDAY.  Which means if you don’t like getting stopped, bumped, banged with a bag or scooter by now, then Saturday should be this times 1000.
I did take a class today too, because I’m just silly that way and have to put everything possible into one day.  It was a mixed Media Miscellany class that was with 15+ teachers and you went around the room spending a few minutes with each one.  I learned some neat stuff, including a thing I HAVE to try with Sharpie markers.  Judy Coates Perez had a jumping table that was always full of students. 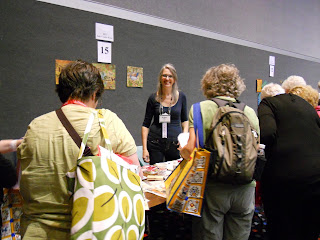 I was duly separated from my money in a prompt way… so let’s do Show and Tell! 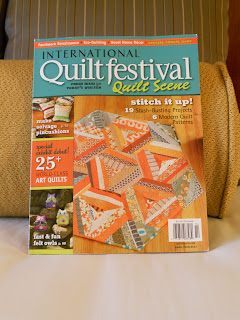 It’s not an IQA show without a new issue of Quilt Scene.  I’m on the Quilt Scene, are you? 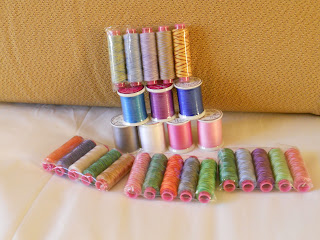 Thread is like candy.  Expensive, addictive candy that cost $7 a piece.  Those packs are a show floor special.  $10 for 2! 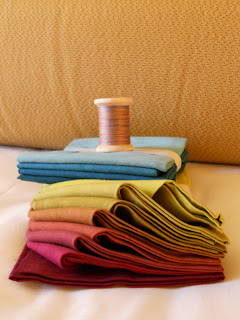 My love for Cherrywood fabric knows no bounds.  I only wish I could cut it up.  Worse, they have a line of thread now.  That’s my wallet gasping. 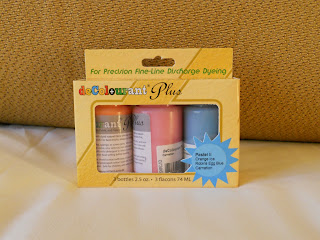 This is some kind of discharge paste/colorant.  I don’t know fully WHAT it does, I just know I had to have it. Ah, miscellany… I love anything Japanese, and the first thing I bought was this banner of the 7 Gods as cats.  Kawaii!  The Dresden came from my class that I took today. When you find hankies with your name on them, you should buy them.  And as an avid hankie user (really… I have tissues at home for guests and the husband…I rarely use them) I thought they were too cool. 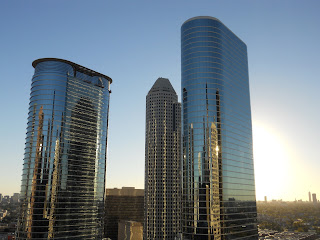 So that’s only Day One!  The Hyatt almost didn’t have a room for me and the buddy from Baltimore who is staying with me, but it all got straightened out.  I’m tired, hungry, and giddy all at the same time.  My friend should be landing shortly and we’re going to scrounge for food and I have to go to bed so I can do all of this all over again tomorrow!