I’m Jealous of Your Quilting Success, and Here’s What I Do About It. 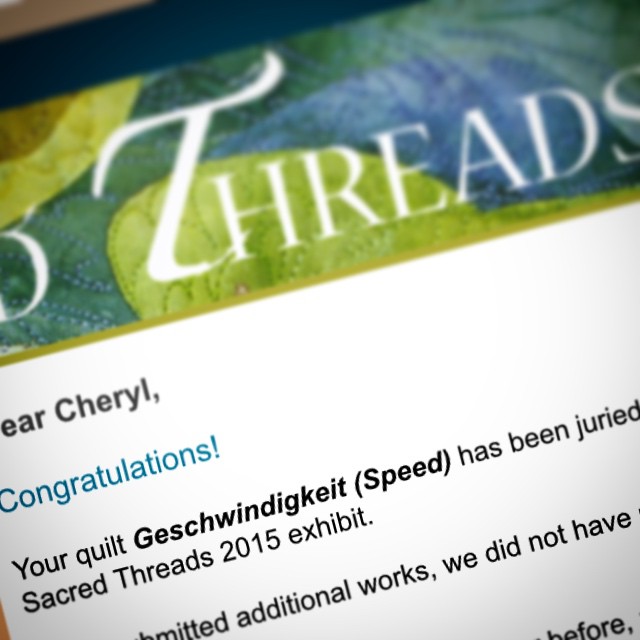 I am the Green Eyed Monster.  I see you succeed at something, and I want it so desperately for myself I can taste it.  My jealousy of your talent is so deep, I have been in a serious funk… more than once… many times to the point of having considered giving up the quilting thing because “I’m no good at it”.

Social media makes it worse.  Someone is always saying great things about a show they got into, a ribbon won, or some other awesome accolade.  I’m happy for them… but secretly… I sure as hell wish it was happening to me.

Way way back in 2005, I attended a quilt show and for the first time saw what the masters of the quilting art were doing.  I was dumbstruck.  I should have been revved up.  Instead I went home and moped.  “I will never be that good”, I said.   That depression lasted a long time too, during which I made barely anything.

In 2009, I was at the International Quilt Festival in Chicago, and Pokey Bolton introduced me to Melly Testa.  Melly and I were instant friends, and we hung out the rest of the show together the way new best friends do.  Over lunch, she said to me “What do you want to do with your quilting?”.  And I knew. Right away.  “I want to get my quilt into a show… No wait… the BIG show!  And.. and… I want to win AWARDS!  And I want to be in the catalog… I want to be picked to teach, too!  but most of all…. I want to be published.”   I told Melly my deepest secret.  And she told me one of hers. She wanted her own fabric line.  I’ll never forget it.

It was my jealousy, yes, but it became something else.  It became a GOAL.

That same weekend, Pokey approached me to be the Moderator of the new Quilting Arts website.  “Hey, you’re always online and connected, would you do it?”  YES!   Next, people asked me to help them with this or that project.  Would I do it? YES!  Man a booth? YES.  Make a block? YES.  Volunteer? YES. Why?  Because I wanted to be included, because my jealousy screamed at me to be “just like them”.

It served another purpose too.  I became someone to be relied upon.  I could step in, and step up.  If you needed someone, I was that person.  I worked… and it worked.

Even now, I see quilt artists….people who I admired from afar but who I am so lucky now to call my friends… and I feel that deep rooted jealousy of their accomplishments.  I still want what they have. I want that cover image.  I want that book deal.  I want that interview.  I want that fabric line. I want that gallery show. Someday, I will get them, because they are now goals of mine.

Are you jealous of me? Because it’s in my nature to want to be liked by people, I hope not.  But if you are, I want to tell you this ONE thing… you can have what I have.

You just have to be willing to WORK HARD to get it.

It will not happen overnight.  A fairy will not come down and magically select your quilt to be in a show without you submitting it.  A magazine will not be opened and an article you did no work towards will be there with your by-line.  BERNINA will not stop you on the show floor and scream “We found our new Ambassador!”.  These things are EARNED. 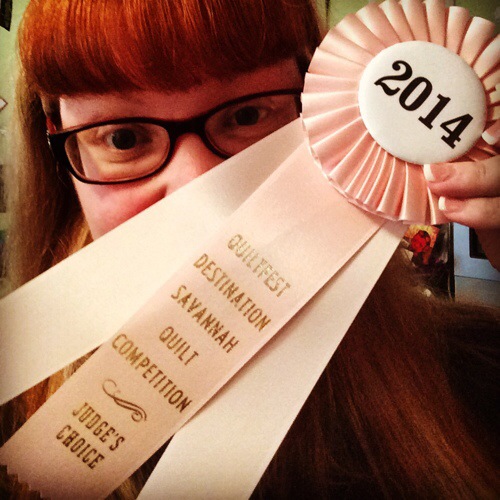 I put in 17 years of quilting towards it.  I have worked hard….harder than I have ever thought I wanted to work for anything… to get to this point in my career.   I took every little step I could take, made every connection I could make, volunteered countless hours, made literally hundreds of mini quilts to perfect my craft… built my own empire… ALL with a smile, blood, sweat, and a fair amount of tears…. just to get where I am right now.

Each of the things I have accomplished started with that seed of jealousy, and in almost every case, that became fuel for the fire in my belly to go get that for myself.  You have to ask yourself…….. how hard do you want to work to get that?  If your answer is “not hard” or “none at all”, then there isn’t much to be jealous over is there?