Ever wonder which way a spool is supposed to go on your machine? I’ve got you covered!

Loading your thread on your machine on the wrong spool holder pin isn’t the end of the world, but if you’re experiencing troubles with a particular thread, this can be a really handy thing to know. Let’s start by talking about thread. Thread is either cross wound or parallel wound. They are pretty easily identified and there are pictures below. Once you identify which thread you are working with, then you know which pin on your machine to use. Let’s take a look. 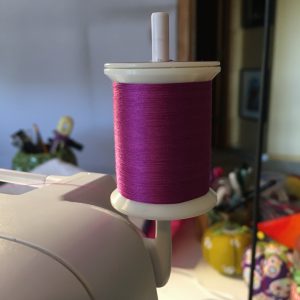 Parallel wound thread looks stacked on itself, and should come off the spool on the side of the spool. The spool should be able to spin freely to allow the thread to unwind off the side. Therefore this thread is best used on the upright spool holder pin on your machine. Remember, you want the spool to be able to spin so don’t cap it tightly. 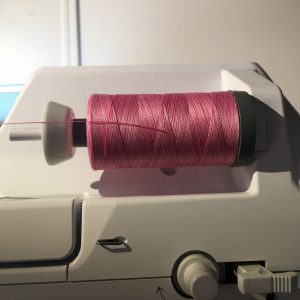 Some people like to use those large cones of thread on their domestic machines. Typically, thread cones are cross wound, so they should remain stationary. Those should be used with a separate thread stand so the thread is wound off the top of the spool properly. Even if the spool is not in a stand, it should be stationary and not rotate.

Hopefully these tips keep your thread moving through your machine properly! Got other thread tips for us? Share them on Facebook!