Technique of the Week #2 – Bleach Pen 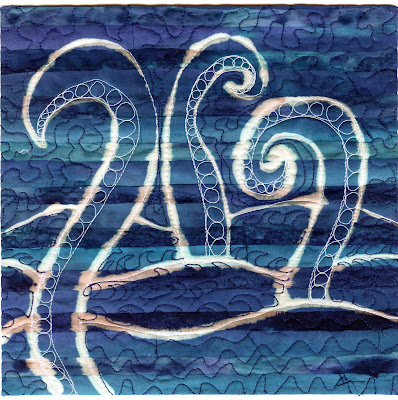 Design and Research- about 2 hours
Execution – About 3 hours

So the LED light up squid got lots of attention from Craft blog and other various websites, and many thanks to the folks that commented and asked about the project.

This week’s technique is taken from a book called Fabric Embellishing, in a chapter about discharging fabric. I could have used all of the methods in the book, but I chose to buy and try out a fabric bleach pen.

The image is my representation of the Kraken.  A new version of “Clash of the Titans” is coming out this year, and the 1981 version is a beloved movie of mine.  My DH is playing God of War 2 on the PS3 and he also encounters a Kraken as part of the Greek mythology in the video game.  So much to my surprise when researching this lil bugger, the myth of the Kraken is NOT Greek at all.  It’s Scandinavian.  And it’s a gargantuan size squid or octopus, not a reptile/man thing.  This was interesting timing to learn this news, as we had just booked a Scandinavian cruise.  So the “tentacle” of fate has reached out to me once again, and I could not pass up making a version of the Kraken.

Things about this technique…  Shake the bleach pen well before using.  My first two tries the bleach was runny and bled much more than this final one.  Also, work in a well ventilated area or use a mask, it’s still strong.  Follow the Anti Clor directions well.  And I thought the use of this unusual batik made for even more interesting discharged areas.