Technique of the Week #22 – Thread Painting 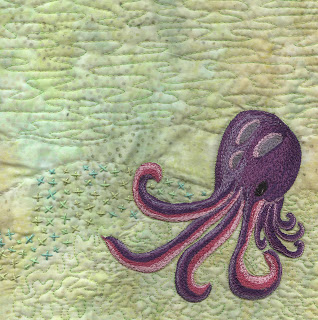 Project Hours: 8 hours
Design and Materials: 2 hours
Execution: 6 hours
It was soooooo good to be back in the “saddle” again.  I took this thread painting class from Elin Waterston at the Cloth Paper Scissors’ art retreat called CREATE.  I had one day, so I was limited in my choices of classes to take, and when I saw this one, I thought it wasn’t going to be something I was interested in, but as usual, I was wrong.  I also thought I “knew how to do that” so it wasn’t going to hold my interest.  Again, wrong!
Essentially thread painting is the layering on of thread free motion style to build up a subject.  Like painting, except with thread.  So the octopus here is only made with thread.  The shading is done to give him some dimension.
The first thing Elin teaches you about thread painting is that there are no mistakes.  And that sums up how our approach was: a free and casual approach.
We were encouraged to bring designs with us, but of course, I had been thinking for two weeks of a subject with no inspiration.  When I got to class, I was going to make an octopus or a pomegranate.  I chose to stay “on theme” for this year, with this little dude.
There are things I did “wrong” that worked itself out, like some puckering that ended up “quilting out” and the shadows of his bumps on his head were done in reverse, so they look like holes.  OOPS.  Oh well, he was an experiment.
A couple of things: this eats up thread. A LOT OF THREAD, so if you covet your expensive thread you may not want to try this.  Second, Elin teaches you to look up, get up, get away every 20 minutes or so.  This was critical, since I ended up hunched over the bed of the loaner Bernina 440 machine slaving away to cover my background.  The class hours were from 9 am to 4 pm, and we sewed for about 4 of those hours. In that time I got the octopus above done and most of the machine quilting, and he isn’t finished yet, so I will post a photo of the finished work later this week! I’ll be adding a section of beads and an embroidered school of fish to complete him.  Enjoy!