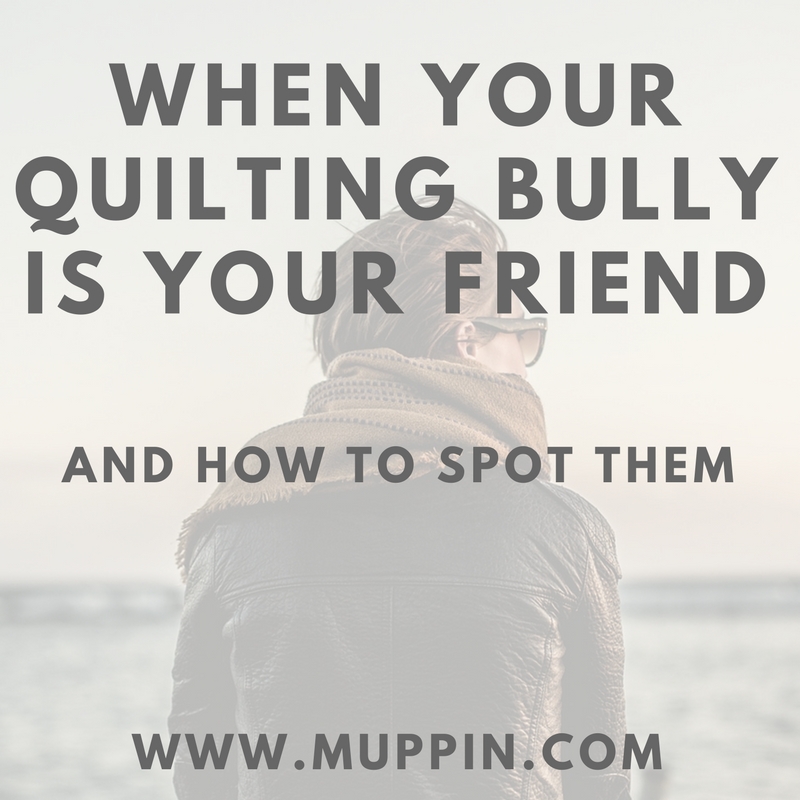 So there’s been a lot on quilt bullies, lately.  From the Generation Q magazine anti-quilt-bully campaign to the “secret Facebook group” controversy that made it’s way to the BBC news, it’s time we admit we have a problem.  Some quilters seem to like to put other quilters down…and I’m not talking about the “I just don’t like those quilts” garden variety we have all encountered or overheard at a show.

Nope, this is some next level shit.   It’s super shocking when you hear about “secret lists” of people being nasty in a private area.  But what if that quilt bully is your friend?  Or at least someone you thought was a friend?

Yeah, I’m an expert on this subject.

You see, I want people to know what I know in this business.  I like to help people.  If you were someone who wanted to know how I got to be on Quilting Arts TV, or be in a magazine, or teach at a show, I am willing to help you.  I have had more than a few conversations and friendships develop over it.  In fact I was told “I was a very handy person to know” when it came to it.  I’m happy when my friends use my advice and advance their career.  It’s what it’s all about.  “Rising tides raise all boats” meaning if they do well, I’ll do well too.

Well really, they are your friend, right?  I can’t say what possesses them to turn on you.  Maybe it’s jealousy over your successes.  Maybe it’s their insecurity. Frankly, I don’t care.  Because nothing hurts more than hearing your “friend” that you have been helping has been ugly behind your back.  And I mean UGLY.  Like trying to sabotage your career ugly.  Stabbed in the back doesn’t even describe the hurt. And I wasn’t even one of the ones who are in that controversy mentioned above, this was all one on one.

And I’m still not over it.  I absolutely HATE to admit that this injury has affected me to the point where I actually second guess helping someone with a question or situation out of fear of being hurt again.  I seriously regret ever helping them in the first place.  It’s affected every part of my career, from other friendships to industry contacts wanting to know why your “friend” isn’t hanging around you anymore to online groups where I used to give lots of advice dropping to near zero.  I felt taken advantage of, and now the world looks like everyone has their hand stuck out asking for the same help as my “friend”.

But here’s what I noticed:

They never give back to you what you give to them.  When the relationship is one sided, that’s when you have to beware.  And who wants friends that only take, and don’t share or pass on their knowledge like you do? And I don’t mean that they are a teacher and that’s how they give back.  I mean, are they helping your career like you are helping them?  Are they singing YOUR praises like you do theirs?  Are they suggesting you to industry folks like you do for them?  If the answer is no, take stock of this “friendship”.

Their conversations are one sided.  If you are talking and everything goes back to them and their project, take this as a warning sign. A real friend listens to you and your end, and wants to help you as much as you want to help them. If everything is about them, watch yourself.

Their hand always seems to be out.  Another weird trait I noticed of the people I’d classify in this way is that they always wanted something free.  However if they had something extra, it NEVER went the other way.   They need to be at the party, could you get them in?  They need an introduction, could you help out?  Did you see this fabric I got at that booth that was free (and no, I didn’t grab you one)?  Yeah, always looking to see what other people have and wanting to get it too… that isn’t “ambition”, it’s greed.

So take stock next time you are with your quilt friends, and pay attention to the stuff they say or post online. Maybe they aren’t a full-on bully, but it could be that they are.  In the secret group, it took one person to call the behavior out and blow the lid off a group of people actually plotting to take down fellow quilter’s careers.

It’s up to all of us to stop bullies from bullying.  If you see something wrong, you need to call them on it or the behavior continues.  If they do continue, then you know you don’t need that person in your life!